If you have the literal universe in your hands, why mess that up? That is the sentiment Olivia Culpo’s fans are chanting in news the former Miss Universe’s boyfriend, Miami Dolphins football player Danny Amendola, cheated on her.

Amendola, 32, was photographed getting very close to former American CBS reporter Bianca Peters over the weekend during Miami’s bye week. The pictures, published by TMZ, show Amendola and Peters taking selfies on the beach, cuddling in the water and the football player pulling the hair out of the journalist’s eyes. No matter what way you look at it, it’s too close.

Current GRAZIA cover model Culpo is currently in Australia shooting a Sports Illustrated cover, a dream she’s been working towards for years. In the wake of the news, Culpo, 26, tweeted the word, “Wow” before posting a picture from her shoot to her Instagram. In it, she’s holding a real local snake and her caption reads “I dedicate this to all the snakes”, a sure-fire clue she is done with Amendola or sending a clear message to Peters. 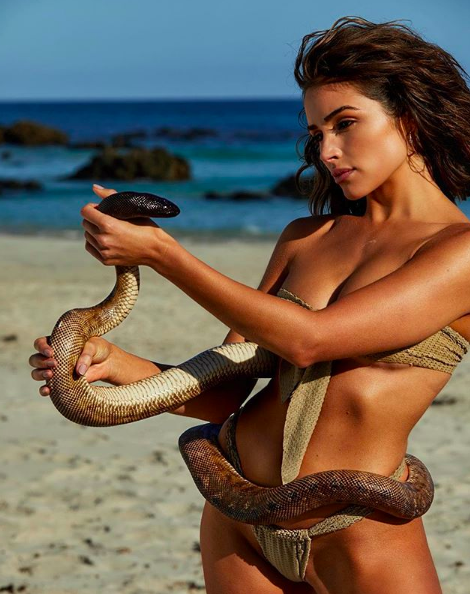 Peters, however, is reportedly distancing herself from the saga. And as she’s trying to start her own media company, it’s wise she does. Unfortunately she didn’t seem clever enough to realise the damage flirting with another woman’s boyfriend will do to her professional reputation. Despite being a reporter, Peters is playing the “I didn’t know he had a girlfriend” card.

“Bianca and Danny met just a few nights ago before they were spotted on the beach,” a source told E! News. “They were at a house party and were both part of a group that decided to go to the beach over the weekend. Danny is new to Miami and Bianca had no idea he had a girlfriend. She is not in that world. She was a CBS journalist who is just starting her own media company.”

“Now that she understands the situation, she has no plans to see him again”, the source continued.

Culpo and Amendola rekindled their romance in March this year, the model posting pictures of the pair to her Instagram. The football star hasn’t posted with Culpo yet. “Olivia is very disappointed and shocked about the photos that came out with Danny getting cozy with another girl,” a source previously said to E! News. “He has assured her nothing is going on between them and that he is really happy with Olivia. Olivia is not totally buying it.”

We’re not buying it either. Miss Universe or not, no woman deserves to be disrespected like that.

Ever the professional, it’s business as usual for Culpo. In September, GRAZIA sat down with Culpo who talked about how happy she was for former boyfriend Nick Jonas and his new fiancé Priyanka Chopra. It was a response that really said something about the type of woman Culpo is in the relationship game. “I think that in life it’s really difficult to sometimes find true happiness and you have to really support one another. We’re all in this life together and if somebody is happy, that is unbelievably amazing. You have to celebrate that and champion that because people who don’t have that attitude are seriously suffering inside. I think the most afflicted people in the world are the people who cannot wish good on others.”